The Boeing CH-47 Chinook is an American twin-engine, tandem rotor heavy-lift helicopter. Its primary roles are troop movement, artillery placement and battlefield resupply. It has a wide loading ramp at the rear of the fuselage and three external-cargo hooks. The Chinook was designed and initially produced by Boeing Vertol in the early 1960s and it is now produced by Boeing Rotorcraft Systems. With over 1,200 built to date the Boeing CH-47 Chinook has been sold to 16 nations. 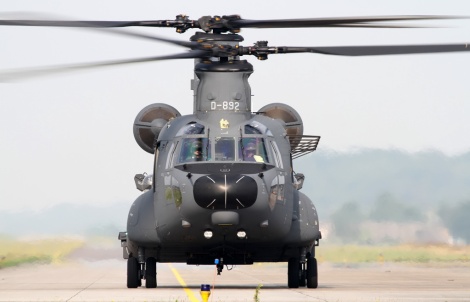 The Netherlands signed an agreement with the Canadian government early in 1993 to acquire 7 Boeing CH 147 Chinooks that were no longer being used by the Canadian Armed Forces. In December 1993, the number of Chinooks was set at 13 (7 used and 6 new), with the second-hand Chinooks being modernised to the same standard as the one’s being purchased new. Boeing delivered the modernised Chinooks to the Royal Netherlands Air Force between August 1995 and February 1996. The 6 new Chinooks were delivered in 1998. They have a modern ‘glass cockpit’ with digital read-outs instead of traditional dials and meters.

The Canadian Chinooks date from 1974 and were thoroughly updated and modified by Boeing. The retrofitting brought them up to the more modern CH-47D standard. In addition to modern communications equipment and avionics, the D version also has greater lifting capability. There are three hooks under the aircraft that can carry a load up to 12,700 kilogrammes. That is twice as much as its predecessors could carry.

Eleven CH-47D Chinooks out of thirteen delivered still remain in Dutch service and the strain is starting to show on these rotary wing assets, two where written off in 2005 (serials D-105 and D-106). The seven ex-Canadian CH-147s in particular are increasingly showing signs of fatigue. 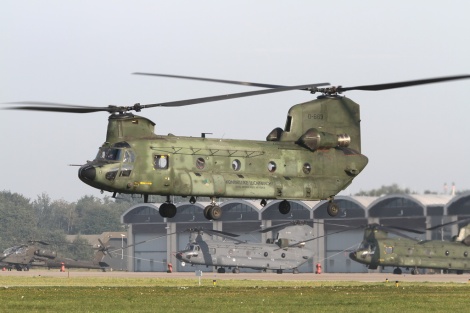 A procurement process is currently running to acquire 6 new CH-47F Chinooks (serials D-890 to D-895). That is partly to replace the two Chinooks that were lost and partly to meet the major requirement for heavy transport helicopters. The new CH-47F Chinooks have been delivered; three will go to Gilze Rijen and the other three to the Joint Netherlands Training Detachment at Fort Hood Texas.

Deployments to the Balkan.

Dutch Chinooks have been deployed around the world. They provided support to the Kosovo Force (KFOR) and Operation Allied Harbour in Albania, and to UNMEE (Eritrea) in 2000 and 2001. In 2002, Chinooks were active in support of the SFOR peacekeeping force in Bosnia. The Chinooks also supported the SFIR operation in Iraq in 2003 and 2004. This was followed in 2005 and 2006 by Operation Enduring Freedom (OEF) in Afghanistan. Chinook helicopters also flew in Afghanistan from May 2007to October 2010 as part of the ISAF operation. 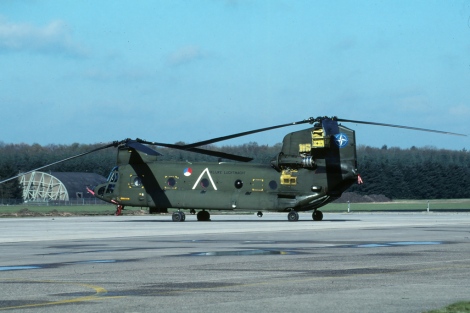 Kosovo Force
As part of KFOR, 3 Chinooks were stationed in the Balkans in 1999. They were used extensively for transporting Kosovar refugees and supplies. They flew more than 700 missions, transporting several hundred refugees and 545 tonnes of supplies by air.

Stabilisation Force
From January 2001 to the end of May 2004, 10 detachments from the Royal Netherlands Air Force took part in SFOR, initially with 5 Cougars and later with 4 Chinooks flying out of Divulje Barracks in Split. Starting in July 2002, 2 Cougars operated out of the Dutch SFOR base in Bugojno. One of the tasks during that deployment was transporting the members of the Incident Response Team to the location of casualties among the SFOR units and the medical evacuation of causalities to hospital (medevac).In 3.5 years, the Cougars and Chinooks logged approximately 4,300 flying hours carrying out nearly 750 IRT missions and 280 medevac missions.

Stabilisation Force Iraq
From July 2003 to November 2005, 3 Chinook and 4 Cougar helicopters alternated in operating out of Tallil Air Base in Iraq, supported by approximately 100 flight-support military personnel. The detachment provided tactical air support to the other Dutch units in the SFIR security force. One of the aircraft was also on standby for medical evacuations.
Operation Enduring Freedom/International Security Assistance Force
From May 2005 to June 2006, 3 Chinooks provided support to the Dutch Special Forces in Operation Enduring Freedom (OEF) in southern Afghanistan.

Since May 2007, Chinooks have operated regularly from Kandahar Airfield in Afghanistan in support of the ISAF mission. Those Chinooks are part of the Air Task Force (ATF) that provides support to Regional Command South to the Dutch Task Force Uruzgan units and coalition partners.

Squadrons equipped with the CH-47 Chinook

298 squadron is the oldest squadron within the defence helicopter command. Its history goes back to the end of the Second World War as NR6 Dutch Auster squadron an artillery reconnaissance unit. This Unit is transformed to 298 AOP (Air Observation Post) squadron at Soesterberg AB in March 1950. In the first years the squadron is equipped with four Auster’s which were replaced by L-21 Super Cub in the following years and a transfer to Deelen AB was made in 1951. The introduction to helicopters is with the H-23 Raven at Deelen AB in 1955. From 1957 until1 963 the squadron operates from Ypenburg AB where it resaves it first Alouette II for the SAR flight (late to become a separate unit).

The squadron used booth types for a short period as the decision is made to create a Bölkow Bo 105 and an Alouette III squadron whereby 298 squadron received the Alouette III in 1979. In the next years the squadron stayed at Soesterberg AB as dues several deployments for the UN. In 1996 the squadron converts to the Boeing CH-47D. Today the squadron still operates the Chinook from Gilze Rijen AB as part of the Defensie Helikopter Commando.

Formed as one of three reserve squadrons 300, 301 and 302 it was formed at Ypenburg AB in 1962. From the three only 300 was axially formed and it started operating in the Training role at first on the H-23 Raven but by august 1965 the transition has been made to the Alouette III. During the following years helicopters were on paper allocated to the squadron but the squadron would only be formed in times of crisis.

302 squadron was eventually formed as one of the two AH-64 squadrons when the Royal Netherlands Air Force ordered the AH-64D Apache in 1995. 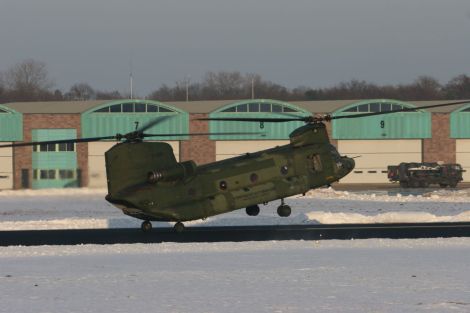 They operated the AH-64 Apache from 1998 when to squadron became operation until 2005. When in a round of budget cuts it was decided that a part of the AH-64D Apache force would be sold and the remainder of the force would be used by 301 Squadron.

In November 2013 302 Squadron reactivated at Fort Hood replacing the Joint Netherlands Training Detachment which has a permanent strength of 8 AH-64D Apaches and 3 CH-47F Chinooks to train the RNLAF Pilots.

Former Dutch defence minister Hans Hillen has informed Dutch parliament that he has ordered the Dutch MoD to initiate a possible buy of eleven additional new-built CH-47F Chinooks in order to ensure the long term viability of the Dutch medium transport helicopter fleet. This would effectively put an end to the planned modification of the current eleven remaining CH-47D Chinook airframes to CH-47F Chinook standard. 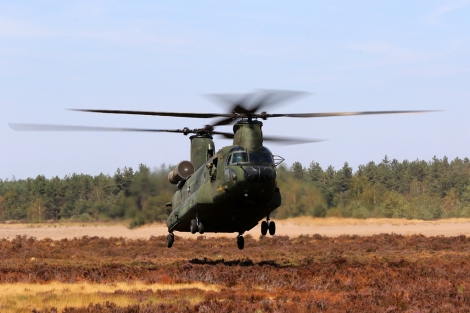 This mid-life update programme was to start from 2016 and would allow the Dutch MTH fleet to stay in service until 2035. The acquisition of new Chinooks is considered to be a more cost efficient solution as it would provide the Dutch armed forces with an extended service life of its Chinook fleet until 2045. Ambition levels concerning the number of possible overseas operations for which MTH support needs to be available will not have to be altered during the process. This will be achieved because the current CH-47D Chinook fleet will be retained to support ongoing operations during the phase-in of the new aircraft. The remaining Delta-models will be disposed of once all CH-47F Chinooks have been delivered.