The two Fokker 50 and four Fokker 60 aircraft are the successors of the three Fokker F-27-100 Friendships and nine F-27 300M Troopships that were the workhorses of the Royal Netherlands Air Force for decades until they were taken out of service in 1996. 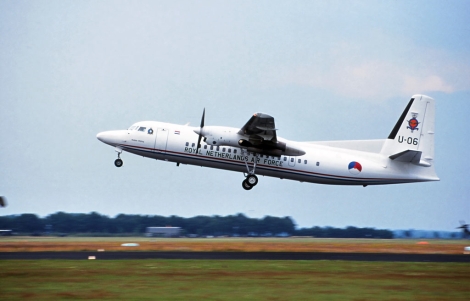 The Fokker 50 is a turboprop-powered airliner, designed as a refinement of and successor to the highly successful Fokker F27 Friendship.

Two of the Fokker 60 were later converted and used for air reconnaissance for the Coast Guard of the Netherlands Antilles and Aruba as a stop gap measure. A task preformed for 2.5 years

The two Fokker 50s were mostly used for personnel transport (up to 25 or 30 people, depending on the version) and had the same colour scheme as the Gulfstream: white with a blue trim. In the secondary role the air force used the Fokker 50 for troop and materiel transport and for medical evacuation flights (medevac).The Fokker 50 has been deployed during their operational life to Turkey following an earthquake and supporting Dutch military personnel in Italy in transporting humanitarian-assistance supplies to Albania. 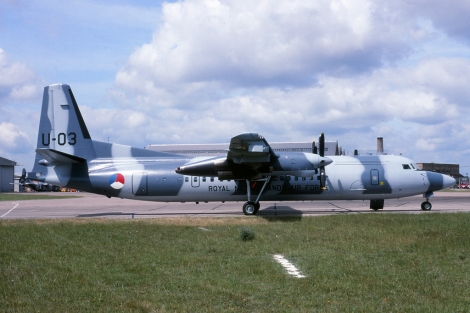 The Fokker60 Utility airplanes from the RNLAF were capable for various missions: transport of people, cargo and medical evacuation. The Fokker 60was equipped with electronic countermeasures could so operate in a war environment. They were also used by the Dutch Amy para troops and the Dutch green berets for para dropping.

To help fill the gap left with the retirement of the Orion, Stork Aerospace Industries modified two Fokker 60s for the Royal Netherlands Air Force, to be stationed in the Netherlands Antilles and Aruba. The modifications to the Fokker 60s included an enhanced radar system, additional fuel tanks and special observation windows suited for surveillance tasks. The Fokker 60 MPA resaved no anti-submarine, anti-surface, or any other offensive capabilities during this modification

Squadrons equipped with the Fokker50/60

The squadron was formed in 1946 but as it continued the traditions of No. 1316 (Dutch) Communications Flight of the RAF also known as the Transportvliegtuig afdeling 1 (TransVA 1), a date off July 7th 1944 isalso mentioned. 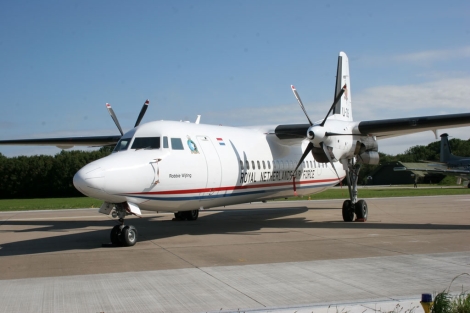 After returning from the United Kingdom it was first stationed at Valkenburg AB until this becomes a NAS in 1957 and the squadron moves to Ypenburg AB. In this period the squadron uses a mix off airplanes including; Dominie, Lockheed 12A, Beaver’s and Dakota’s. With the introduction of the Fokker F27 most of the other types were phased out with the last Beaver leaving the squadron in 1966.

On 23 August 1960 the first of twelve Fokker F27s was delivered to the squadron. The unit received three Fokker F27-100 Friendships and nine Fokker F27-300M Troopships
In 1968 the squadron moved to Soesterberg AB were it stayed until May1992 before the last move to Eindhoven AB where it still is stationed. In 1994 two C-130H Hercules aircraft where added to the squadron wich where transferred to 336 squadron in the following years. In 1996 the Fokker F27 where replaced by the Fokker 50 and Fokker 60 aircraft with the squadron for about 15 years. Today 334 squadron operates the (K) DC-10and Gulfstream aircraft.

End of the line

When the Royal Netherlands Air Force decided to buy two extra Lockheed C-130s, the Fokker 60s were phased out. First to go where the two Fokker 60 UTA-N in 2006 followed by the Fokker 60 MPA witch served in the Caribbean until the end of 2007.

After their retirement the four Fokker 60 were stored at Woensdrecht Air Base awaiting a possible sale. Eventually they were sold to the Peruvian Naval Aviation, the first two planes were delivered on June 8, 2010 and the second batch of two planes is delivered at the end of 2010. 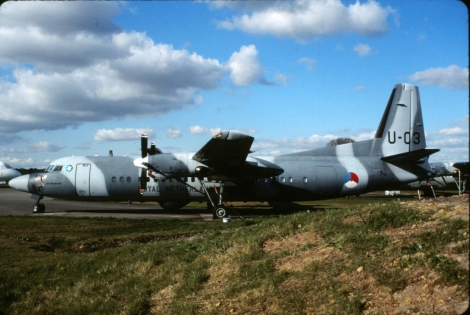 At November 17th 2014 the departure of two former Royal Netherlands Air Force Fokker 50s from Lelystad Airport to Peru ended a long era in which the RNLAF used Fokker aircraft. Four Fokker 60s had already been sold to the Peruvian Navy in 2010. The departure of the two Fokker 50smakes the transfer of all the Fokker 50 and 60 aircraft to Peru complete