Winter is a wonderful time to experience Grand Teton National Park. As the snow drapes a wintry blanket across the Teton Range, a peace settles over the landscape, offering a sharp contrast to the busy summer season.

Snow has a way of transforming even the most stunning and familiar landscapes into worlds beyond recognition. This is especially true for Grand Teton National Park.

Some areas of the Park are closed during the winter to protect wildlife, but the vast majority of the Park is open and available to explore. Moose, elk, bison, wolves, trumpeter swans and other local wildlife are exciting to watch during the winter months, when more extreme conditions play a role in already fascinating behavior. Go out for a stroll on your own or learn about Grand Teton National Park’s fauna by going on a guided tour.

In the winter, thousands of elk on the National Elk Refuge sandwiched between Jackson and the park feed on native vegetation and, when necessary, on alfalfa pellets provided by the Refuge staff. Every year on the Refuge, some of the weak, the ill, and the old elk die, becoming food for coyotes, wolves, eagles, ravens, and magpies. Moose, bighorn sheep, bison, and mule deer are common winter residents. Bighorn sheep can frequently be seen on Miller Butte

The History of the National Elk Refuge

The Jackson Elk Herd historically wintered and migrated through what is now the town of Jackson. At the turn of the 20th century, development began which ultimately affected migratory routes. Elk got into trouble by invading rancher’s haystacks and competing with cattle in grazing for natural grasses. 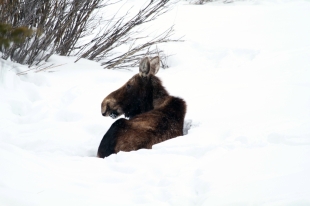 It was at this time that the residents of Jackson became concerned that the native elk herd would not survive without some form of human intervention. On August 10th, 1912 lands were set aside “for the establishment of a winter game reserve and in 1940, a Presidential Proclamation was issued that changed the name from Elk Refuge to National Elk Refuge.

One response to “Winter in Grand Teton”