Kestrels are a familiar sight with their pointed wings and long tail, hovering beside a roadside verge. They have adapted readily to man-made environments and can survive right in the centre of cities. 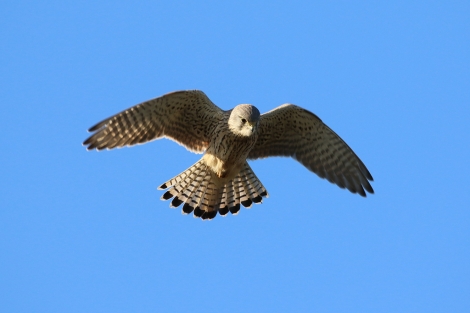 With their keen eyesight, sharp talons and strong beak, kestrels are well adapted to catching small agile prey. Kestrels are masters of stationary flight, and hover-hunt extensively. They also hunt from perches, altering their hunting method to suit prey type, weather conditions and energy requirements. On farmland kestrels have learned to watch farming operations, waiting for the tractors to flush prey.

Small rodents are by far the most important food for kestrels, although they regularly take on other small prey such as small birds, insects and earthworms. In towns they take birds more frequently because of lower availability of small mammals.

A kestrel is capable of locating its prey at remarkable distances – it can see and catch a beetle 50 m from its perch. Kestrels need to eat 4-8 rodents a day, depending on the time of the year and the amount of energy-consuming hover-hunting they do.
They have a habit of catching several voles in succession and caching some for later.

The stored food is usually eaten the same day just before dusk. This reduces the risk that the bird would have to go to roost on an empty stomach.