Intelligent and social, hyenas make for diverting photography subjects especially around there dens. We were lucky enough to meet them two times during our travels in Kruger Park a few years ago and see some nice interaction. 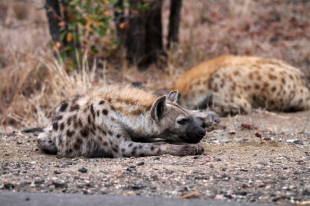 At the time the hyenas where using some divers under the road for their den, on arrival we were greeted by the sight of hyenas all around the den. The adults were resting while the playful youngsters were full of energy. The group consisted of all ages from tiny cubs through teenagers to adults.

The spotted hyena is arguably the most successful large carnivore in Africa, because it is both a proficient hunter and scavenger – displaying resourcefulness and stamina in its foraging pursuits. It is the only mammal that can digest bone, which it crushes in its powerful jaws.

With the cubs being curious they started gathering around the vehicles sniffing the tyres and the others parts and even some nibbling, because of their razor-sharp teeth they can quite a bit of damage if you let it go their way.

Nonetheless, we spent quite some time with the hyenas watching them interact with the cars and see the cubs playing around. Sadly we had to move as the sun was setting and according to the park rules we had to be in encampment by sunset.