Bears that are considered “regulars” often become known by a name.  This isn’t in an attempt to humanize them or to give them traits and characteristics that they may not have.  Bears are given names simply as a means to identify them.   Some bears are known by the numbers that wildlife researchers have assigned to them such as “399” and “610” in Grand Teton National Park while other bears, such in Katmai National Park, are identified by using names.  Yellowstone National Park has always had a black bear sow named “Rosie” probably for as long as black bears have been seen around Roosevelt Lodge, with this name being passed down from bear sow to bear sow.

This day we started early and headed up the Tower Road. The black sow Rosie with triplet cubs of this year had been seen the days before, so we hoped she’d be out there at the usual place.  And that proved to be the case.  We found sleeping in the forest with the cubs hanging out in a tree. After waiting for more than a hour she got up and sadly moved up the hill out if site. 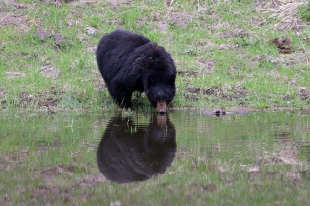 In the afternoon we tried again and had more luck, this time she was near the little lack grazing.  The cubs were wrestling and goofing around like all youngsters should do, not bothered by the crowd off people on the other side of the little lack.

As is usual for YNP, there was a large crowd gathered to watch. There were also three rangers helping to control the situation. They were friendly but insistent that the animals be given appropriate space and that traffic flow smoothly. Their goal is to not let humans alter any wild animal’s behaviour in the park.

The black bears of Yellowstone seem very tolerant of people. They will typically graze right next to the road with 20 parked cars and a crowd of people 40 feet away. The bears look up occasionally at the circus and then go back to their eating. This docility can lull people into a false sense of security with a very wild omnivore, but I think generally people are very respectful. 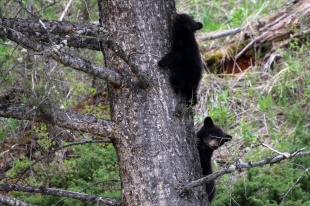 Black bears inhabit the forested parts of the park primarily, but they can be seen almost anywhere in Yellowstone. Watch in meadows at the edges of woods for dark round dots, typically black, that seem to be moving.  From a long distance away they are easy to miss and are generally smaller looking than you would think. They can show up at carcasses but grizzlies are not their friends and so they are always ready to leave should big brother show up. Look high up into the trees also because a cub’s first defence is to climb. Mothers will often shoo their kids up a tree and then go a short distance away and wait for the trouble to leave.

The most reliable area to look for black bears is in the Tower Roosevelt Area. Begin looking from the petrified tree road all the way to Tower.