The Cruzeiro do Sul Exercise (CRUZEX) is a multinational flight exercise organized by the Brazilian Air Force. The first edition was held in 2002 and since then has changed and improved the way to employ airpower.Except for the 2002 and 2006 AB edition, all the editions took place at the Natal Air Base. This base has the necessary structure to conduct such an exercise, as well as favourable climatic conditions and location.

CRUZEX is designed to train the Air Forces in the planning of combined operations with friendly countries, as well as training the military personnel of the Brazilian Air Force to operate in a modern structure of command and unified control of aerial power

The history of Cruzex starts in 2000 when Brazilin observers participate in in the Odex exercise in France. During this exercise the following scenario was followed as an inspiration for Cruzex. The exercise simulated an armed conflict between Border States that due to the international law, the intervention of a peacekeeping force was necessary for the ceasefire, the process of “peace enforcement”. As seen in the conflict in the Gulf region and the Balkan these scenarios are now more common than the old cold war scenarios and the Brazilian air force wanted to prepare itself for a possible commitment for such an event. From 2000 on preparation started for the first Cruzex exercises Brazil. Over the past exercises thirteen foreign countries participated and other countries joint as observers. 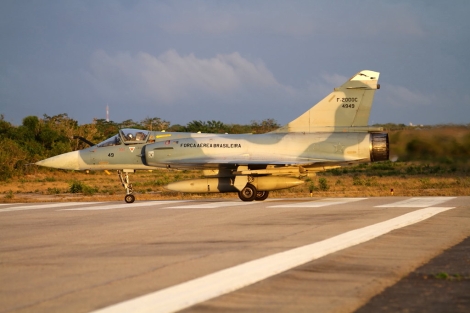 The first edition of Cruzex took placeat Canoes air base in 2002, next to Brasilia Argentina, Chili and France participated in the exercise that was based on an invasion like the one in Kuwait. That would test the command and control structure and joint planning of combat missions. It was the first time ever the NATO procedures were used in a South American combined exercise and it was herald a success. The Brazilian Air Force concluded that the exercise results were very satisfactory and paved the way for CRUZEX

In 2004 the second edition was held at Natal air base, this edition included air forces from Argentina, France and Venezuela, as well as the host nation Brazil, while Peru, South Africa and Uruguay sent observers.The exercise was designed on a simulated low intensity air campaign scenario within the constraints imposed by peacetime regulations and safety issues. Two main Brazilian air bases, Natal and Fortaleca, where involved in the fictitious clash between two countries, Green and Yellow, fighting over an area rich in mineral resources.

The third edition was held at Annapolis air base in 2006, The Exerciseis a scenario was as in the previous exercises based on an UN controlled conflict featuring three fictitious nations: Red Land, which has invaded its ex-territory Yellow Land, and the Blue Land who supports the Yellow Land people. To push the Red Forces out of the invaded Yellow territorythe Blue Land forms a coalition force with Argentina, Chile, and Uruguay, Venezuela and France and goes to war against the Red Land. The Peruvian Air Force was intended to participate also, but sadly one of its A-37B aircraft crashed while in route to Annapolis AB killing the crew.

Again placed at Natal Air base the fourth edition was in 2008, participants included next to the host nation Chile, France, Uruguay and Venezuela. Argentina was to have participated, but was forced to cancel shortly before the exercise began. The scenario for the exercise was compatible with previous years,as a simulated low intensity air campaign within the constraints imposed by peacetime regulations and safety issues.

In 2010 the fifth edition of Cruzex at Natal Air base was heavily influenced by the knowledge gained in the Red Flag exercise 08-03 in which Brazil participated.
In the fifth edition the air forces of Argentina, Brazil, Chile, the United States, France and Uruguay participated actively in the exercise.The number of countries that where participating as observers during the exercise grew again. Highlighting the importance given to this exercisein the region. For the United States air force it was the first participation with aircraft after being an observer in previous years.France a member since the first Cruzex brought their Rafale and Mirage2000, where the Rafale could be seen as a contender to replace the Mirage 2000.

Already the sixth edition of Cruzex atNatal air base in 2012 was fully a command and control exercise, in other words there was no actual flying during the exercise. With personnel from Brazil, Argentina, Canada, Chile, Ecuador, United States,France, United Kingdom, Peru, Sweden, Uruguay and Venezuela, this year’s edition of CRUZEX has the largest number of participants ever in the exercise. The 2012 version of Cruzex was also a preparation for the 2013 event.

In this year’s exercise the seventh edition of Cruzex ones again held at Natal air base approximately 100 aircraft took part in the exercise, of which about 85 of where based at Natal. Countries that participated included; Brazil, USA, Chile, Venezuela, Uruguay, Ecuador, Colombia and Canada. Argentina which took part in all the preparations cancelled their participation with the Douglas A-4 Skyhawk on the last moment,there place in the planned exercise was filled by Brazil.

The Joint Force Air Component Command (JFACC) was headquartered at Natalair base, while additional units were stationed at Recife. Operating from Natal air base with many of the fighter types housed in sunshelters. The participating air forces were composed of: Two Canadian Lockheed C-130J Hercules not as transport, but this year the exercise will also include specific missions for transport aviation, such as airborne special forces launching; Fife Chilean Lockheed Martin F-16A Falcons ; Six Colombian Cessna A-37 Dragonfly From Barranquilla in the north of Colombia To reach Natal more than 4,700 kilometres had to be flown. The trip lasted for two days, with one night spent in Manaus. In the two flight segments in a row, the KC-767 refuelled five times each of the six A-37 Dragonfly; Ecuador sent four Embraer Super Tucano aircraft ; Uruguay sent a three Cessna A-37B Dragonflies and a three FMA IA-58 Pucaras, while Venezuela and the United States contributed with fife and six Lockheed Martin F-16A Falcons.

Brazil participated with the largest force drawn from different squadrons of the air force . Operating from Natal were five Dassault Mirage 2000 in there last month of operating for the Brazilian air force as there are to be withdrawn from service at the end of November,eighteen Lockheed F-5EM Tiger IIs, twelve Embraer A-1A, A-1B, A-1A reconnaissance AMX, four Embraer A-29 Super Tucanos; two Lockheed C-130Hercules and two Casa C-105 Amazonas. Next to the fixed wing aircraft a helicopter force participated including one Aerospatiale H-34 SuperPuma, one Bell H-1H Iroquois; four Sikorsky UH-60L Blackhawks and new to the exercise where three AH-2 Sabre Mi-35 acting in the Special Operations Combat Search and Rescue (CSAR) role. 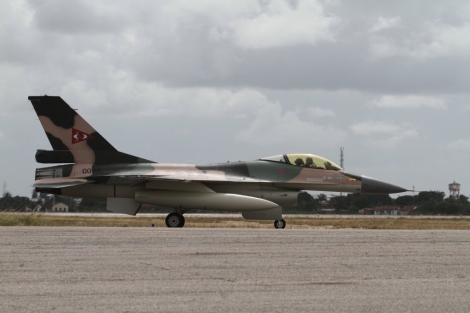 Operating from the Recife military apron was the tanker force including;Colombian Boeing KC-767, the Chilean and the American Boeing KC-135 Stratotanker together with the Brazilian Lockheed KC-130 Hercules and Embraer E-99 Airborne Early Warning & Control aircraft.

During the exercise Caicó airfield served as a base for a H-34 Super Puma helicopter of the Brazilian Air Force for possible search and rescue missions. Located 250 kilometres away from Natal, Caicó airfieldis a strategic point it is here that a three-dimensional radar TPS-B34 together with command and control equipment was installed to control the exercise. The management of air traffic was performed by the Third Integrated Centre for Air Defence and Air Traffic Control (CINDACTA III)at Recife. With the use of new techniques and equipment for the creation of a three dimensional picture of the exercise for debriefing purposes’ was greatly improved.

The participating nations trained alongside each other in fictitious scenarios to prepare for potential events across the world. These internationally-sanctioned actions might include supporting peacekeeping and stability operations, supporting civilian authorities during humanitarian response operations and assisting coalition neighbours in the aftermath of a natural disaster. In the years the missions became more varied and know include combat search and rescue, aerial refuelling and combined air operations centre training opportunities focused on interoperability. During the exercise no live weapons where used, only simulated attacks were carried out.

The Exercise Director Major General Mário Luís da Silva Jordão,asserted the changes applied to the last two editions of CRUZEX,especially the division between the real use of aircraft and the virtualenvironment of the exercise, previously operated at the same time.”CRUZEX evolves every edition and our experience has made us conclude what we should focus on. The intention is to excerpt the most of each operation and now I can say that, with these changes, our goals have been achieved”, he said.

The size and quality in exchange of experiences allows Cruzex ranked it one of the most important multinational exercises, and most importantly in the context of Latin America. This importance with each new edition attracts more participants / observers countries

We thank the Brazilian Air Force HQfor arranging our visit to Cruzex 2013 and especially the staff at Natal air base for their hospitality and help during our visit.